Here we are at the end of summer with my last finishes! First up is Ding Dong Merrily on High by Little House Needleworks. I cut it pretty close on this one to use up the remnant from You are My Sunshine-really pretty fabric. And anyway, it will be an ornament. Little House makes such cute things.

And for the grand finale, Wishes Do to Heaven Aspire by Lindsay Lane Designs:

It is gorgeous in person and this is a terrible picture.  Plus, it is supposed to have mother of pearl heart buttons on either side of the date but one of the buttons that came in my kit is flawed. I am looking for a good replacement before I finish it off into a little pillow.

Now I have 2 little things going, God Bless by Sisters and Best Friends and For the Birds by The Drawn Thread.

In God Bless, I have changed all the colors. I usually follow the designer’s recommendations religiously! But not this time! And I am so glad, it all looks so fine together. I am using Watercolors Silk Glowing Embers for the stars and name and it is about the most gorgeous thing I have ever used.  It makes me want to stitch everything from now on in Glowing Embers. This little piece is so nice, I think I will make it again with the verse only and no name and make a little round thing with it. I think it would lend itself to that quite well. But for the current project, I think it needs a silver star charm to hang off that moon (that’s why the dark thread behind, so I have something to tie that star on with). I am on the hunt.

Sadly the picture does not adequately show off the colors! The moon is Auntie Dee, a rich navy, purple-y midnight blue. The verse is Dungarees, really a true cornflower. And Glowing Embers is a jewel tone rainbow.  Now I just need the “James” after Daniel and birth info. Then the silver star and done!

Lastly, here is the little center tree in For the Birds: It will be another fun piece.

Continuing from yesterday here are a few more things finished up this summer:

All My Love by Sisters and Best Friends

I made this for our 15th wedding anniversary. It was quick but had a trick for me-there are 2 different red beads used-very similar-and I ran out of one kind about ¾ of the way through so I had to hunt around to find a good match. These little setbacks always seem to take me so long to resolve-they seem insurmountable! But there they were, the perfect bead match,  at JoAnns! Hooray! Then off to the framer. She always does a marvelous job. I am so pleased with it.  He likes it too. It was a good surprise…in August..2 months after our anniversary.

You are my Sunshine by Cathy Jean of The Victoria Sampler

Ahh, I have had this FOREVER. How long? It was supposed to be #1’s baby piece but he is almost 9 now (and does not like it  for his big boy room) so there it is, I’ve had it, at least 8 years, probably closer to 9. I still like it so now it is for me. I have wondered, what will I do with the boys’ needleworks when they are too big and manly to want them on their walls? I hope by that point I will have my own space in the house and I will put them there to remember my babies. I am not so concerned about the girls because theirs stand alone as beautiful pieces for their walls even if they are baby records. I will show you them later. In any case, you are probably wondering how it is that the girls both had beautiful, involved pieces made and framed even before I started #1’s. I don’t know! What was my hesitation? (I hem and haw a lot). Maybe because of the silk. I had not used silk before-just the little bit on Bee Blossoms, and you know what happened with that!- but oh my, how wonderful it is to make rows and rows of crosses with silk. I just loved it. There is a lot more silk in my future!

Autumn Garden by Cherished Stitches-Lovely lovely. So fun. A good learning experience with attaching the chenille. To finish I made a little muslin bag just a hair smaller than the pillow which I stuck inside, and filled with lavender scented walnut shells. The scent is mostly worn off now-it wore off really quickly! but it has a nice heft. I will use this finishing technique again. The chenille was easy once I figured out a method to attach it. It is really a great little piece. Very satisfying.

I followed the Autumn Garden up with Summer Gathering by Cherished Stitches-Also lovely. I had to make a summer one right away so the seasons I had made would be correct for the years on them you know, since I plan to do the winter one this winter. However I do not care as much for the recommended finish. All the other pillows in this set have a backing material and a chenille trim and I prefer them more alike. For this I actually would like a burgundy pom pom trim to finish the edge of the pillow, made with the provided fabric, and forgo the buttons and burlap trim. I think the pom poms will set off the red flowers/berries well. Now. To find pom poms in burgundy. There is so much RED available!

It’s been a very productive year for me, needlework-wise, all spurred initially by a rebuke over my consumption of the dataplan while waiting in line to pick up the kids from school. Clearly I needed something else to do! I started with some of the Mill Hill ornament kits I’ve had around for quite some time and after making about 20 of those

realized I really should not be afraid to do something bigger while I sit in the car. Finding-or making-time to stitch has always been my struggle in this hobby, and now I think I have it between the school pick-up line and the nightly tv hour. Having regular finishes deserves a blog! So here it is. And here they are, what I’ve gotten done this summer, along with their stories. Because nearly every piece has a story, right? Trials and triumphs.

Here’s a triumph- Just Nan’s Let It Snow humbug-though in all fairness, I finished it last year and just never put it together until this year-I felt intimidated putting my first little objet together like this but it was so easy, I will really enjoy making more humbugs. I know I have a few wanting to be made…

Just Nan’s Bee Blossoms. The story on this one starts with a coup de coeur. I loved it right away. I had to have it. I was lucky to get a complete kit a while ago but then it hung out being admired as my favorite thing I would someday make. Finally I started it last year. I started in the middle (being new to band samplers but I wanted to make sure the middle ended up in the middle) So the 2nd or 3rd row I did was the variegated silk crossed corners stitch. It was tricky to see the mulberry floss on the mulberry ground (I didn’t have my Ott Light yet). I decided to save it till later. I worked the rest of it. I did it in the car, it travelled a lot. It was very nearly done. When I went to go back and finish that tricky band, lo, the limited edition special mulberry silk was GONE! It had fallen out somewhere, gotten stuck on me and been dropped, it was lost forever! I got up the courage to go to LNS to make a match. I guess I am naïve but…neigh impossible. I picked a good cotton substitute and even convinced myself the sub was better. It was a bit bolder, but still almost perfect in the color family. It would work. But I hesitated to put it in. It didn’t feel right. I am very committed to doing projects according to the designers’ directions-my fatal flaw! And in the end, it is a good thing I did because-you would not believe-that floss had fallen into the molded plastic pocket of the driver’s side door and gotten buried under all kinds of stuff. It wasn’t until we cleaned the car out thoroughly before a vacation that I found it! Whew! I stitched it right in, it was the last thing I did so no fussing about running out, I was just generous with the areas of floss color I wanted to show. I think it came out wonderfully. I will have it framed. I need more framing budget.

It is  ok about that replacement floss-it didn’t go to waste-I used it later in another finish I will explain next week.

that pesky crossed corners band is right under the bee lace 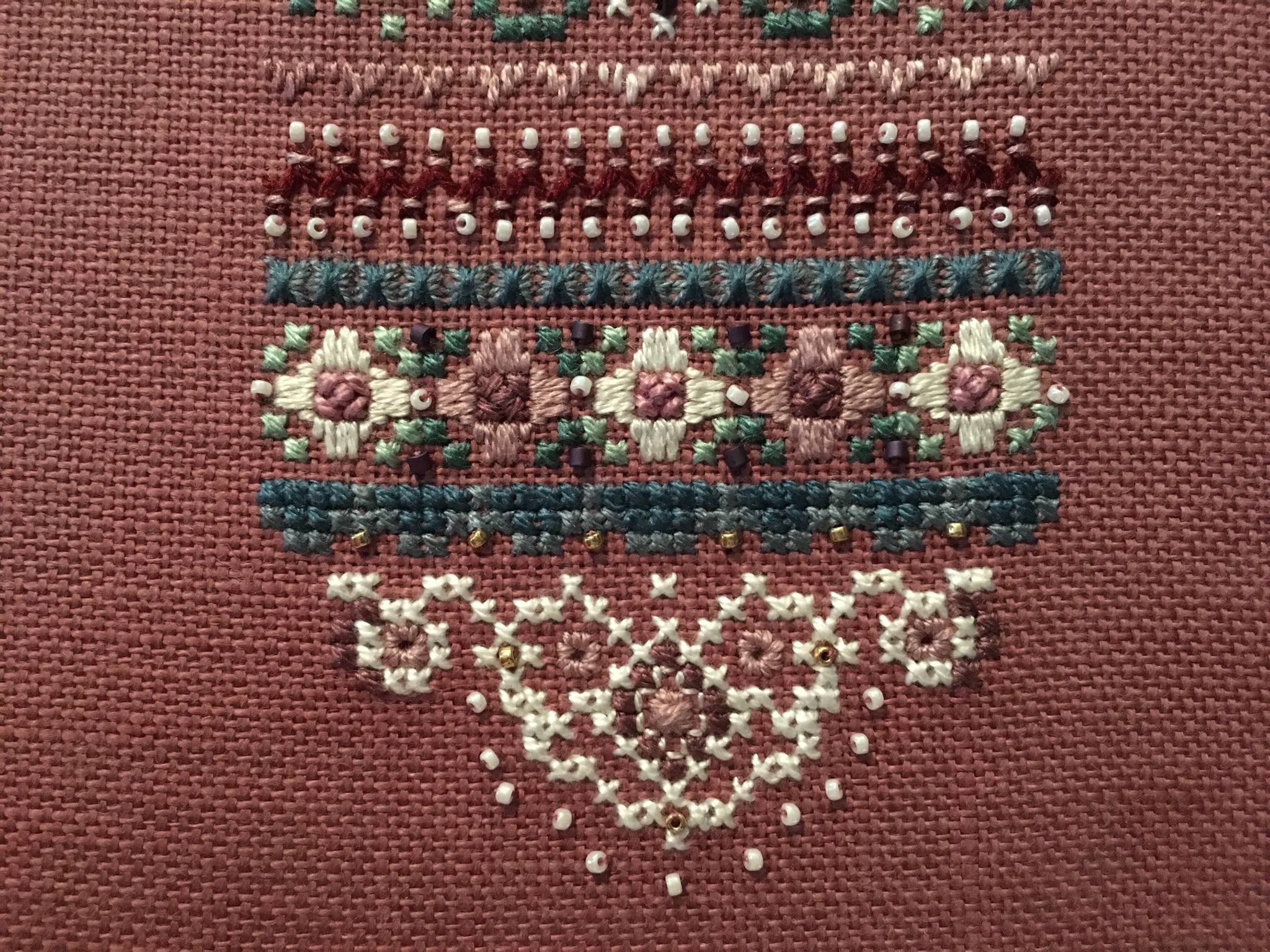 detail of the bottom portion

I started this blog in 2016 to chronicle my stitching life. My Grandma M. taught me to cross stitch when I was 7 and I’ve had a project (or many!) going since then. I am mostly a cross stitcher who makes forays into other types of embroidery. A lifetime ago I studied French and art history but now I fit my stitching around a busy life raising 5 young kids with my wonderful husband. Thank you for spending some time at my blog!